For a number of decades now, FIFA has been linked with allegations of corruption. Fifa Scandals strings of arrests prior to the 2015 FIFA election, it all but confirmed how big of a problem corruption has been, with investigations by the FBI dating back to 1991.  Further allegations have been made with Chuck Blazer, admitting to systematic bribery for the past couple of decades and the leaking of a letter addressed to FIFA vice president Jerome Valcke instructing $10 million payment to be made to Jack Warner (providing solid proof of the FIFA vice presidents involvement).

To the non-football fanatic, the first thing that would come to your head when you hear the word FIFA is the game that’s always in the PlayStation. But for lovers of the football it represents something a lot more sinister and adverse than that. It’s hard to believe that something that brings so much love and joy can cause and contribute to so much corruption, deviance and pain. Comedian John Oliver referred to FIFA as a “comically grotesque organisation”, and he’s not far off.

What has FIFA Scandals put us through?

It’s very obvious the love that Brazilians have for football, however FIFA were able to turn this joyous football loving nation into an angered one for a number of reasons. Many Brazilians were actually opposed to the World Cup being hosted in Brazil. Firstly because the Brazilian government spent over $11 billion to prepare for the World Cup, which understandably angered the majority of the Brazilian population that live in poverty in the favelas and slums.

It’s hard to disagree with them when you considered that a stadium that cost $280 million was built in the city of Manaus (a city so remote that it is almost impossible to get there by vehicle, meaning materials for the stadia had to be delivered from Portugal, through the Atlantic and through the Amazon river). This seemed outrageous considering that there is no team in Manaus to fill the stadia, so it will become vacant after the 4 world cup games have been played there.

Staying on the 2014 World Cup in Brazil, what financial benefits did they receive from FIFA and the World Cup?

Well Brazil wouldn’t make money directly from the FIFA World Cup! How could FIFA a non-profit organization with $1.5 billion in the bank, allow a developing nation such as Brazil to spend $11billion on hosting the world cup and not offer any subsidies, financial incentives, or at the very least a percentage of the revenue made by FIFA? As if that wasn’t bad enough, FIFA were exempt from all taxes at all levels. FIFA and their subsidiaries were allowed by the Brazilian government to forgo $250 million (estimated by the Brazilian government) in taxes.

FIFA also forced laws in Brazil to be overturned whilst the World Cup was hosted there. In 2003 the Brazilian government banned alcohol in stadiums because of the high death rate amongst fans in the stadiums. However because Budweiser are one of FIFA’s largest sponsors/partners, FIFA decided to protect their sponsorship interests rather than protect their ethical stand or protect the fans in the stadiums. Instead they insisted they had the right to sell beer (Budweiser). FIFA won in this battle with the Brazilian government and a ‘Budweiser bill’ was introduced during the World Cup to allow the sale of the product in stadiums. Could FIFA’s behavior get anymore shameful or embarrassing? Yes!

Even ethically FIFA is failing. For example football is meant to be an inclusive sport, where many people of all genders, races, disabilities, cultural backgrounds and sexual orientations should not only be able to play, participate and watch, but do so free from discrimination and be treated equally. However if we take a closer look at Sepp Blatter’s (FIFA president) views it’s clear to see they’re far from liberating. 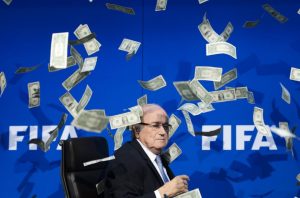 When asked on how to promote women’s football? Blatter suggested the women should wear shorter/tighter shorts. Also Blatter controversially said “Say something ladies, you are always speaking at home, now you can speak here” (when commenting about the first 2 female members of the FIFA executive committee.) Or when questioned on Qatar’s (World Cup hosts in 2022) laws on homosexuality (a place where homosexuality is illegal) Blatter said, “I would say they (gay fans) should refrain from any sexual activities.”

Furthermore this is also the same FIFA president that believed racism on the pitch should be settled with a shake of hand at the end of the match. In almost every single way possible (morally, culturally and ethically) FIFA is failing to commit and fulfill its ethical duty to society. How could the most powerful man in football, have such small minded and ignorant opinions? Surely a FIFA president must be a pioneer for change and equality in society?

But probably FIFA’s worst crime in recent year is in relation to the Qatar 2022 World Cup.  As Qatar prepare for the World Cup they are violating the workers human rights. Migrant worker can’t leave the country without permission from employers (which are not granted).

Why? Because their passports are taken away from them on arrival so they are literally trapped.  Nepalese workers were not even allowed to return home for funerals of loved ones and relatives, that lost their lives after the devastating earthquake that hit Nepal in April. The migrant workers living conditions are so disgraceful living on the street would actually be safer (definitely cleaner). Workers are crammed into sharing rooms with dozens of co-workers. They are also forced to work 6 days a week, working between 10-12 hours a day.

The most upsetting part of all of this is on average more than a worker a day dies on the site of stadium construction.  It’s estimated that before a single ball has been kicked over 4000 migrants worker from India and Nepal will be killed due to working conditions and health and safety. And while FIFA has the power to put pressure on Qatar to improve conditions, they choose not to.

Everything about FIFA and the way it is run resembles that of an evil cartoon villain group.  Steps must be taken to ensure that our game is led in a way that represents us, the millions of football followers around the world. The answer is not just to change the man at the top, but to completely restructure the organisation, this must be the first step; restructuring the organisation, as the current model does not fit our era. T

he current 24 man executive committee should be scrapped and a modern day corporate structure of board of directors should be introduced, including a number of independent board members that have been voted for by FIFA congress. The position of FIFA President and vice should be replaced with the role of Chairman and Chief Executive (this is common practice in multinational businesses/organisation).

For fans and media looking in from the outside, lack of transparency means we have no idea what’s going on in there and we cannot understand how decisions are made.  The next step must be to make FIFA more transparent. Therefore once the restructure has been completed the board of directors should review all of FIFA’s processes and policies. This would (in hope) result in establishing more transparent processes and methods of decision-making.

Most importantly for me though, the reform in FIFA will be a great opportunity for FIFA to establish where they stand morally. For example, where does FIFA stand on the working conditions in Qatar? What are FIFA’s views on how homosexuals are treated in football (both on and off the pitch)? How will FIFA deal with sexism towards female players, officials and fans? Or where will FIFA stand on racism in football? This is a real opportunity for football to really have a positive impact on the world and reflect the same joy it brings to us on the pitch as it does off the pitch.

Many who believed Blatter was running a sinking ship will no doubt be happy that he has announced he will be stepping down. However, metaphorically speaking, the ship is still sinking, there is a real opportunity for FIFA to be saved, otherwise I fear FIFA will always represent the worst of Football.